Understanding the exact factors leading to the kind of socio-political-cultural change the TV serial Ramayan could bring into the Indian subcontinent has always been a rather baffling experience for me. Despite my best efforts, I have never been able to crack how on earth could the Maganlal Dresswaala foreground and the rapturously revolting Ravindra Jain background catch the fancy of so very many viewers across the country. Seriously – and this is where it gains significance in our forum – Ramayan, at best, was B-grade cinema in a pukishly pretty mythological avatar, with a rather cracked conglomeration of lousy actors, lousy sets, lousy costumes, lousy wigs, lousy masks, lousy special effects and lousy everything else.

Compared to Ramayan, the other lethal mix of Punjabi-Bollywod aesthetics and Gujarati-Bollywood imagery, Mahabharat, was a shade better in terms of production values. But even this BR Chopra creation finds its rather important place under the sun in our space, essentially because of the wealth of actors it could contribute to the cause of B-grade cinema. Gajendra Chauhan, Girija Shankar, Pankaj Dheer, Nazneen, Arjun, Puneet Issar, Mukesh Khanna … quite a few of these guys actually stemmed from the abyss and then went back again to where they belonged immediately after the serial got over.

Okay, before some of you decide to burn me, my laptop and my computer table (and Vijaypat Singhania’s hospital, MF Husain’s paintings and a few cybercafés, while you are at it), this is not meant to be a comment on the epics. It is the sheer shoddiness of these serials, and the scars that that they have left, that I am commenting on, specifically talking about their actors.

Arun Govil: Post Sawan Ko Aane Do and Saanch Ko Aanch Nahin, all Mr. Govil saw was the downward path till that effeminate wig in Vikram aur Betal helped him get back in front of the audiences. Who would have imagined that a 30+ failed actor of repute would make a rather grand re-entry as Maryada Purushottam Ram, straight out of a high school fancy dress competition, obtuse hair-do, beedi strained teeth, plastic smile et al. He was a phenomenon while it lasted. Unfortunately, it was not for very long. After Ramayan, Govil and his hired dhotis made paid appearances in Ram Lilas across the country till LK Adwani took over his role. Last heard, he played one Inspector Deodhar in Dhaal: The Battle of Law against Law. Whatever.

Deepika Chikhalia: Ekta Kapoor used to be a normal girl growing up on Mills & Boon and Nancy Drew, playing hopscotch with her little sister Tushar. Till she watched Deepika aka Seeta in action, that is. And that’s where she found the prototype of Tulsi, Parvati and what have you, all rolled into one. Deepika was the immediate cause for E-jee’s mental degeneration that has led to the K-attacks being inflicted on us. Ms. Chikhalia went on to do two bit roles in a few movies opposite Rajesh Khanna (this was in the bloated-rectangular-face phase of RK’s life; the bearded-dried-tomato look followed later) and also became a respected Member of Parliament. Yeah, that’s the same place where Hema Malini and Dharmendra also go once in a while. Uggh.

Was this guy gay?

Sanjay Jog: He was the non-smoking brother of Ram. Jog did impress in his character of Bharat, but his career could not move beyond Jigarwaala or Naseebwaala. Wonder where he is right now. He would have found employment in any of the BATA showrooms. Nobody takes care of footwear as he does, seriously.

Yeah, laxatives do this to him

Sunil Lahri: From bhaiyya Ram to bhaiyya Kishan… wow! If somebody could do a two bit role in a two bit actor’s debut film (the reference, of course, is to Aaja Meri Jaan) then that man must surely be out of job. I rest my case.

Why didn’t they give him a rape scene in Ramayan, seriously?

Vijay Arora: Vijay Arora sang Chura Liya to Zeenie baby. And then he played the lead in Nagin aur Suhagin. And then he widened his eyes and landed up as Meghnad, looking like Karunanidhi without his glares, speaking Hindi in Punjabi. Arora’s rapist-in-a-dhoti look did not find any takers following the epic, and though he did do ten odd movies subsequently, his career graph could never go further north.

Talking of actors from Ramayan, special mention to Padma Khanna aka Kaekayi. Guru Suleiman Chela Pehelwan, Ghunghru ki Awaaz, Sultana Daku, Kasam Durga Ki… Padma Khanna was destined to do B-grade Hindi films, though she did end up doing a not so bad job in whatever better movies she could act in. And, of course, there was Dara Singh, the king of the B-bling. Nalayak. Boxer. Lutera. King Kong. Raaka. Badshah. Hercules. Samson. Faulad. Rustam-e-Baghdad. Jagga Daku. Sherdil. Khakaan. Tufaan. And this on-screen Hanuman also could squeeze Mumtaz in his spare time. I bow to thee, master!

Before I move to actors from that other epic Mahabharat, let me reiterate that my list is not at all comprehensive. I am sure I have missed quite a few gems. I would put the blame squarely on Jambwant, yet another of those Ramayan characters, for my sudden loss of memory. I just remembered him, and unfortunately, my thought process is stuck now. If you are not familiar with him, imagine a fat man with thick black hair all over his face and body. Then imagine the same man constipated for 10 continuous days and despite all the sat isabgols of the world, unable to get it out. Now imagine the same man attempting to utter “Shree Ram”. Yeah, that was Jambwant. And yeah, thanks for sympathizing with me.

Mukesh Khanna: Naam – Bheeshm Pitamah. Baap ka naam – Deenanath Chauhan. That sums up our man in Mahabharat. Khanna moved on to become the quintessential Thakur/ policeman across various movies, progressing from Jaidev Singh to Suraj Pratap Singh to Shakti Singh to Mangal Singh to Thakur Raghuveer Singh to Khushwant Singh to Thakur Harnam Singh to Rana Mahendra Pratap Garewal to Rai Bahadur Mahendra Pratap Singh. Btw, those were real names of the characters he has played, no kidding! Meanwhile, he also produced, directed and acted in this brilliantly tacky TV serial called Shaktiman, which has helped a whole load of unintelligent lower middle class kids stay the same all their lives.

What is that again, Gandhari? 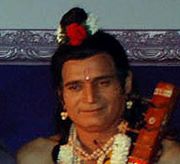 Dharmesh ji in one of his very many mythological avatars

Dharmesh Tiwari: Tiwari played Kripacharya in Mahabharat. Then he acted in Aurat Aurat Aurat. His claim to fame is that he has been the President/ Secretary of Cine and TV Artistes Association for the longest time. Obviously, they follow the BCCI model.

Give it a caption. I am bored.

Pankaj Dheer: From Mera Suhag to playing Karna in Mahabharat and then to the Zee Horror Show, Dheer’s filmography could have been more impressive had he got the right breaks. Pity, because he could act better than lots of the other guys.

Add a crown. Retain the dumbness. You would get Yudhishthir.

VIRUS ALERT: If your Roopa Ganguly search leads you to the wmv file on the right, don’t download it!

Roopa Ganguli: Krishna saved her in Mahabharat. Wish he was also around to save her from Bahaar Aane Tak, Inspector Dhanush and Meena Bazaar. Good actor, though. She has done a few quality Bangla films, making up for her debacle in the Hindi market.

Q. What do you call Puneet Issar when he gets goose bumps? A. Porcupine

Puneet Issar: A blur of massive chest hair is all what I remember of Puneet Issar from the show. Of course, he had already proven his talent in Purana Mandir, Saamri, Zalzala and Zinda Laash before he cracked the role of Duryodhan. I guess he had done enough of sari pulling already. After Mahabharat, Khooni Murda and Roti ki Keemat are enough indicators of Issar’s superb body of work. And if that does not impress you, unravel this man through his directorial debut Garv: Pride and Honor. I am getting goose bumps already.

He also did a two bit role in Karan-Arjun. Irony, etc.

Arjun: He was quite the hero of Mahabharat. And with actors like Praveen Kumar and Gajendra Chauhan playing his brothers, he did not have to work extra hard for that, either. Unfortunately for him, he did not find any takers in the film industry, and was reduced to playing the comic villain sidekick in films after films. Don’t know where he is now. Poor sod, his vanvas continues.

You see him in his pullovers, and you automatically go “OH, GOD!”

Nitish Bharadwaj: He who perfected the art of smiling with his lips sealed and the art of nodding with his head unmoved, Nitish won quite a few admirers for his performance as Krishna. The charm did not last beyond the great war. A few insipid movies like Trishagni, Naache Nagin Gali Gali and Sangeet later, he was back in his Krishna avatar, only this time asking for votes for BJP. As of now, he wears Made-in-Ludhiana pullovers and is some kind of a lower level spokesperson for his party.

To come to their defense, the tragedy of most of the religious stars is that their screen image becomes so very imposing that the audience just refuses to accept them in form of any other character. Despite the roaring mega-success of Jai Santoshi Ma, Anita Guha could not do anything significant, EVER. This, precisely, is the reason why most of the religious stars’ careers – including the ones discussed – have taken such sharp nosedives after their initial success. Unless, of course, they have been saved by Kanti Shah and his producer brethren. Thank god for that! ;-)

There are some things money can’t buy. For everything else, there’s MasterCard.

(Can somebody help me format this? I cannot, for the life of me, understand how things work on WordPress. :|)