My Bihari cousin is getting married to a lovely Tamilian girl.

I am sure the dainty Miss Sridhar must be doing her homework already to know more about what she is getting into. We may not have life sized cut-outs of Ms. Cloaked Rotundity and Mr. Goggled Baldness, but we have enough loud fodder loud enough to make her feel at home. What we lack in flashy flamboyance, we make up with our brassy brashness. We are a raucous country, yes ma’am. When the alphabets were getting distributed, the Biharis decided to take everything with all the hard consonants. Marathis come a close second. Pethe, Kekade and Madke would agree.

But let’s stay on Bihar. Or in Bihar, if I were to take Raj T’s advice.

So we have Litti, Laktho, Thekua, Ghughni, Bhabhri, Makuni, Khaja, Pedakiya, Gaja, Dalpittha as a smattering of names randomly taken from the Bihari fridge. NONE of them sound appetizing. Not one. They taste phenomenal, but they don’t sound like something you may want to consume. And some of them look like what they sound like.

Blame it on the pastoral background of the Biharis, if we were to get all historical and sleuthy. While the neighbourhood Bengal was busy carving intricate creases on their Nolen Gurer Sandesh, singing their Baul and doing their Dhunuchi Naach, Biharis were too busy either tilling their lands or rearing Chanakyas, Buddhas and Mahaveers. So they did not really have the time to create artworks in the kitchen or outside of it. We developed as an ungainly and unsophisticated nation, without any apology and with a definite hint of pride. Take it, world!

And this gets reflected in everything we do. Or say. Or make. Or celebrate.

Which brings me to Chhatth, a festival that some theorists claim even predates the Vedas. At the concept level, it has perhaps the most modern outlook for a festival so ancient. There is no idol worship at all in Chhatth, unlike most Hindu festivals. It is not gender or caste specific. And there is no involvement of a presiding pandit. No random mumbo jumbo being babbled by some patronizing priest working on an hourly remuneration in front of a gaudy concoction of gods. It is a festival with rituals led by the devotee, dedicated to the deity. A hardcore one-on-one with the all-encompassing to acknowledge and achieve the common, combined greater good.

Spread over four days, the worship is dedicated to the Sun god and his wife Usha, greeting and thanking them for creating and controlling all the life forms on the planet earth. While Chhatth follows Diwali, it is no selfish agrarian festival stemming from the contribution of sun to the agricultural produce, coinciding with the cultivation. It is a very noble recognition of the influence of sun in our combined lives, way beyond its material beneficence, with pronounced philosophical undertones. Which explains why the worship of the rising sun is preceded by the veneration of the setting sun.

Only, I don’t remember getting influenced or enamoured by any of this while celebrating Chhatth in the Patna of the late 1980s. Neither by the philosophy behind the festival, nor by its rather liberal stance. Outside of the exhilarating thrill of traveling at 4 in the AM for the morning arghya, moving past the colourfully lit-up roads to a crowded Pehelwaan Ghaat or Collectorate Ghaat, and then letting the feet play with the cold, moist sand, what actually has stayed with me is the harsh aesthetics of it all.

I am not referring to the festival, of course.

I remember the crowd. A sea of humanity amidst all the muck of the riverfronts. People rushing at the ghaats with their chaadars, fighting for and marking their territories to be as near the slushy expanse of the Holi Ganga. The rich and the powerful moving around with their gun-toting musclemen. The blaring loudspeakers, the long traffic jams, the arguments on the roads, the hawkers selling posters of Hindu gods, including Arnold Schwarzenegger, and the general wide-ranging cacophony of the people forming a buzzing backdrop. It all came together into something memorably lurid and raw. 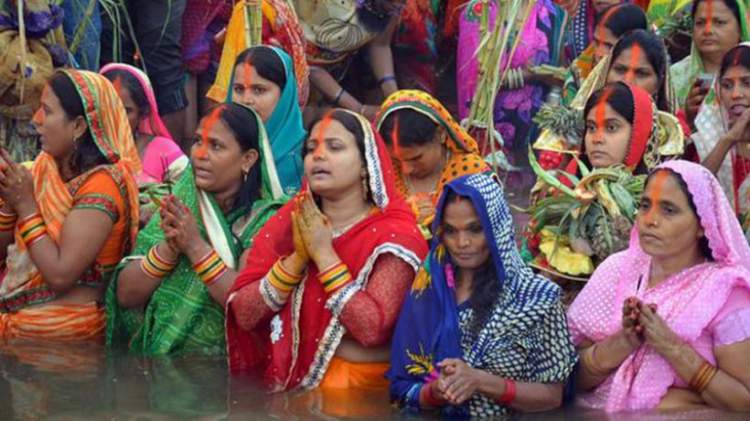 This rasping rhapsody was amplified by the sindoors on the noses of the parbaitins, or the fasting worshipping ladies. Indeed. A shining, flaming, thick and radiant saffron vermillion marking starting from the tip of the nose meandering into the parting of the hair. Imagine multitudes of ladies with their brightly painted noses half immersed in the muddy waters, offering their obeisance to the rising sun. The effect was mesmerizing. The effect was daunting.

To be fair, though, it was not just these nose antennas that were browbeating me into meek submission to all things colourful and coarse. The GulshanKumarization of India had just about started to happen. The combined might of jhankaar beats recorded in cheap Darya Ganj studios on Super Cassettes was beginning to juice the entire pantheon of Hindu gods and goddesses. Johnny ka Dil Tujhpe Aaya Julie was being appropriated as Bhakton Ka Dil Tujhpe Aaya Devi, and then some. People not only seemed okay with these, they were, in fact, revelling in them. It was a crude, uncouth phase in the life of India, both culturally and otherwise. Patal Bhairavi and Bhavani Junction were legit Hindi cinema releases, Rajeev Kapoor was playing the Lover Boy, Rajesh Khanna was romancing Reena Roy, and people were really paying to see Raj Babbar on the large screen.

It was the attack of the lowbrow. And Chhatth was as impacted as any other festival.

So in the middle of the folk songs evoking the Sun god, the shrieking loudspeakers would play one of them Karolbagh ditties sung by Babla and Kanchan. Hum Na Jaibe Sasur Ghar Re Baba. Yeah. Soon enough, these tardy renditions were accepted as a part of the mainstream. The eighties never left the festival. The festival never left the eighties. Every subsequent Chhatth was more of the same. Exciting. Rousing. Breath-taking. And very bloody loud.

I moved on. Bombay became home. Then I shifted to Mumbai.

Patna, Bihar and Chhatth continued to be a part of my subconscious persona, but not being there meant not being there. My new native city gave me newer references to ponder over. I had graduated from Gai Ghaat to Lal Bagh. I had moved on. Or so did I think. Untill I suddenly discovered the luminous vermillion-nose brigade in a traffic jam at Juhu one fine evening. The parbaitins were back in my life, and how! And I was amazed to see that twenty-five years later, the unhinged aesthetics and revelry were unaffected, give or take a few Sanjay Nirupams trying to make Chhatth the North India Pride Parade. It was beautiful. To be in that jam. To be back there. To relive the scale and the noise. And to revisit the fantastic reasons behind the celebration of this wonderful festival.

Here’s to many such discoveries, Sanjana! And welcome to the family. Some of your new relatives may look like aliens once every year, and their vocabulary may be predominated by words with ट, ठ, ड and ढ in them, but we are good, warm god-fearing people, I promise you. Despite that fluorescent patch on our noses. Or because of it. :)