So. I received a polite message from one Clara Julliard Scott on Twitter DM, earnestly checking on my family and me. She informed me that she had just randomly come across my profile, and got “so much interested” in knowing more about me.

Now don’t get me wrong here. I am not some country bumpkin not acquainted with the ways of the world. I know the internet is a bad, bad place. I do realise there are lots of scamsters around, ready to pounce on their unsuspecting victims. I am aware that they use honeytraps to target dumb men, and extract money out of them. But I believe in the inherent goodness of mankind. And there was something very sincere about Clara Julliard Scott. Her bust size.

Considering I am the benevolent guy who would even chat up with feminine sounding bots in the Yahoo! chat rooms, there was no reason for me to doubt her integrity and not reply to her. I did.

Soon enough, we were making plans to meet up in person. Never thought my humdrum life and my “sincere heart” would ever be found attractive by anybody, but I was obviously off the mark here. Guess I was saying all the right things, making attempts to regale her with the everyday stories about my life, and Clara was just lapping it all up. I also slipped in an invite to India for her without sounding too eager.

Of course, there were the initial hiccups, as we tried to gauge each other and our respective intentions. There were clear gaps in our communication and some glaring language issues. But I took it upon myself to politely and playfully correct her, as I described my life to her, inviting her to be a part of it. I will admit, I exaggerated a little when I said that the royal elephant would receive her at the airport. That was wrong. The royal elephant does not know where the airport is.

My noble intentions, and the heartfelt desires to see dear Clara in person must have congested her arteries with love, because she was talking her India visit already in the middle of the gigolo-google turbulence. She did ask me to fund the trip, but before you judge her, the charitable and indulgent Ms.Scott was just honouring my enthusiasm and impatience to take her on camel and ostrich rides in my country, okay?

This was too good to be true. Both the rational me and the emotional me were totally afflicted by the large-heartedness of this gentle soul. No woman had ever agreed to ride ostriches into the sunset with me. Hell, no woman had ever agreed to ride anything into, or after, the sunset with me. This was overwhelming. And then I did the unthinkable. I proposed to her.

We were ready to take our relationship to the next floor.

However, in my zeal to get married, I realised I had ended up bragging about my riches. Clara Julliard Scott, the lady with the spine, would take none of it. She was not in it for the monies, no way. She wanted to marry me because she had “feelings and respect” for me. Ever since she discovered my profile on Twitter a day before.

I fell hook, line and sinker in love with this kind, compassionate woman. She was the one. I started envisaging plans to give her the most comfortable stay at my village as she worked on the modalities of us getting married in America. 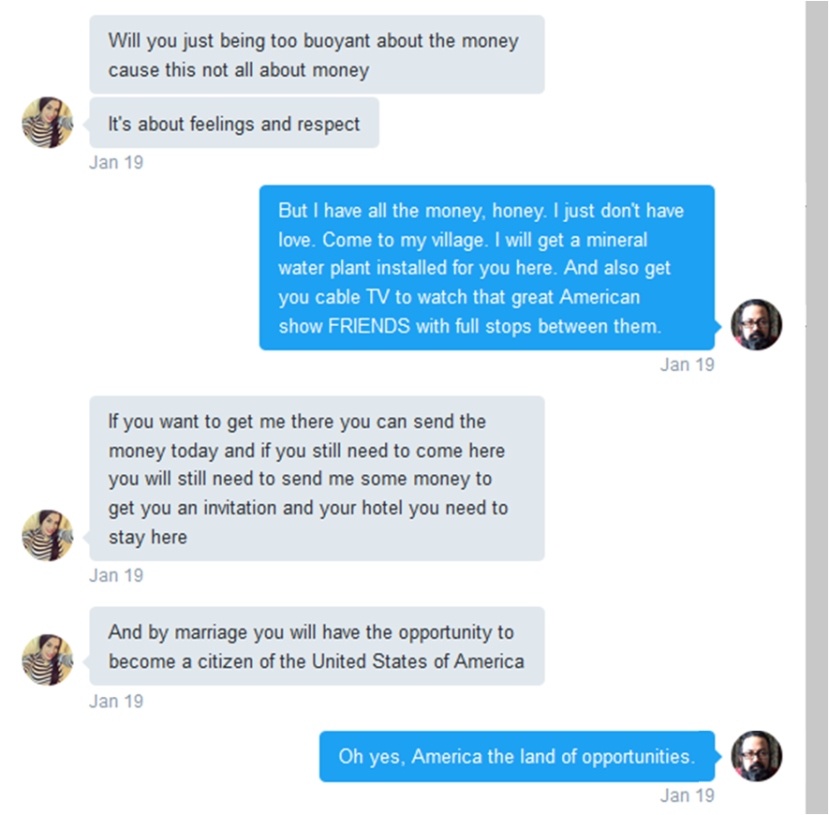 Ah, that sweet feeling of settling in love! Nothing else mattered. With stars in my eyes, copulation in my mind and sexting on my phone, we were at it already.

Or at least I was.

Clara was equally yearning for this union with me. But unlike the sappy, weepy petitioner of love that I was being, she was more practical with her approach. I continued to be indebted towards the entire Julliard Scott family for making Clara into the complete woman that she had so beautifully turned into.

The astonishing lady did the exact mathematics in no time to figure that $855 would be sufficient for her to do all the hotel bookings for our marriage in the US. I had meanwhile, sent her my flight options. We were all set.

It was my turn to reciprocate the urgency displayed by Clara. I got in touch with the family accountant. The anxiety was killing me. I needed to see the smile on Clara’s face.

Plus, I needed intel for my pintel. Namaste was the game changer. Yes. 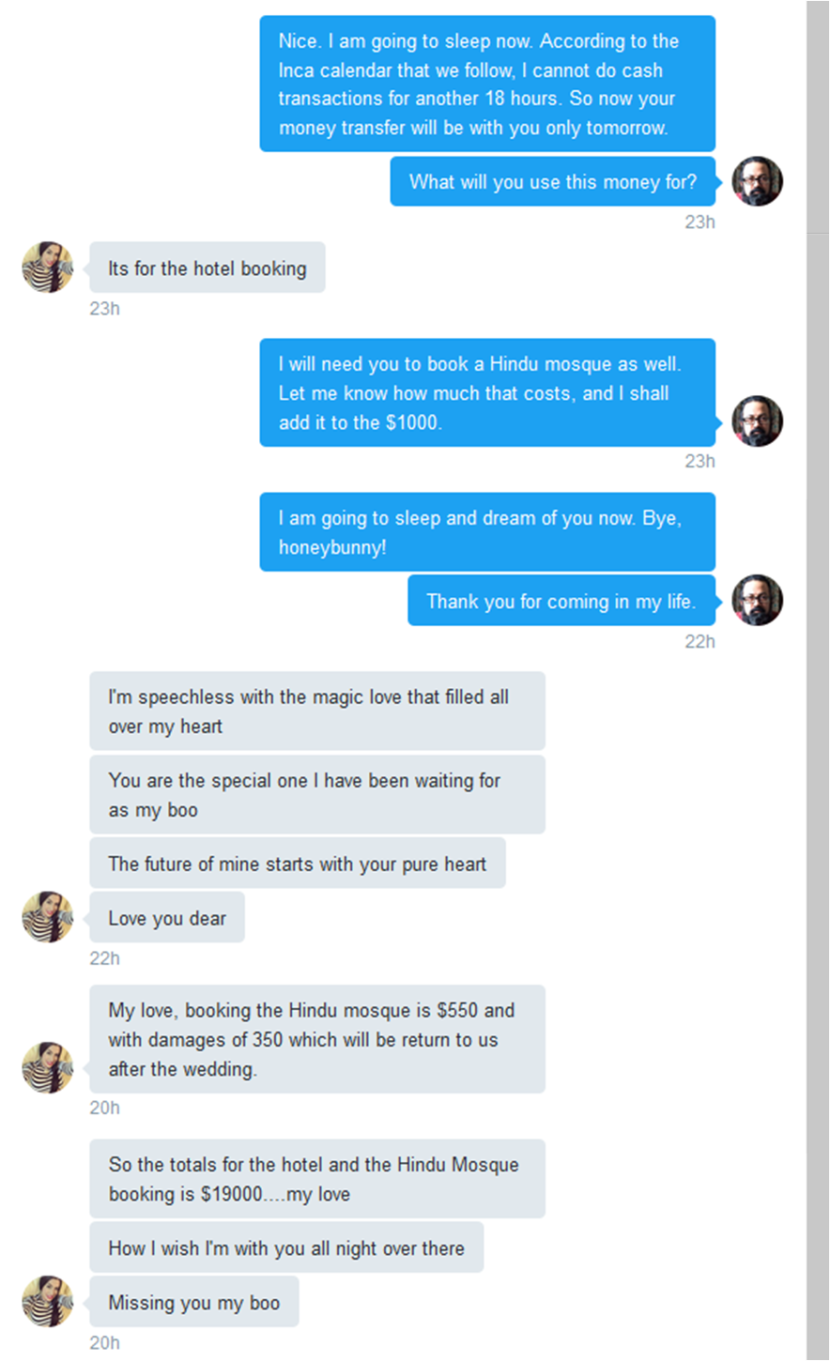 I woke up a totally charged man. I was painting good-morning imageries in my head that could have been Whatsapp forwards. I was singing songs that didn’t exist. I was floating in exaggerated metaphors around love. And I was ready to rekindle our romance yet again.

From $855, our love had now reached the $16000 mark. This was beautiful. And she was willing to accommodate Moti as well at the wedding.

I want to put this on record that I am totally against dowry. I have never taken dowry from any of my wives.

Time was of the essence, but Clara seemed a bit concerned. I had to chase away her misgivings. I was ready to give her whatever proof she needed.

Instinctively, however, I could figure that this wasn’t going in the right direction. Despite the depth of my love, I represented a rather shallow set of family traditions. And my ladylove could see through this.

PS: This is why dowry is a social evil, people.

She wanted to see my mother. And she sure had a strong, acerbic point of view on the family that was selling its child for $100 “because a lady fall in love with him”. I would be dishonest if I say that didn’t hurt. But then again, she was not wrong. :|

This is why I have always had issues with my family. With my father and all his wives. I am not dam Scam. I insist.

Our love story came to an abrupt end. Flustered and frustrated, she blocked me from Twitter and her life. It has left me a sad man, but I sure am not bitter or sour about it.

I have her memories to live by.

And I also have the instagram handle from where s/he borrowed all her pictures. :)

(My family pics courtesy FB albums of some of my friends. Taken without permission. Please don’t tell them. Also, if you are fantasizing about Clara Julliard Scott, Suman Jha and Probaldwip Bakshi would like to express their deepest gratitude.)